What is it? Why is it dangerous?

The Emerald Ash Borer is a small beetle that imposes a large problem. This beetle is a new threat to the United States, as it was just recently discovered here, feasting and laying eggs in ash trees. Though this insect looks relatively like many other beetles, it can be classified as the Emerald Ash Borer by its green body and glossy wings. It is also larger than most other beetles, at .3 to .55 inches in length; however, this beetle is considered to be quite slender.

An Emerald Ash Borer can live for a few years, continually eating the leaves on any ash tree that it infests. The adult beetles that eat the leaves are not typically the large issue; the larvae of these insects are the culprits to blame for killing off an entire ash tree in a matter of just two years. The larval stage for the Emerald Ash Borer can last upward of two years. In these two years, the larvae move into the bark of the ash tree, feeding on the inner bark, and they continually do this until adult stage is obtained.

These larvae eat the phloem tissue of the tree (the inner bark), which is the part of the tree that carries the sugar throughout the rest of tree. 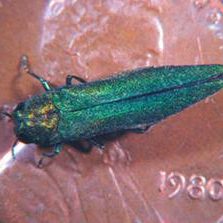 If the phloem is being eaten away at, then different parts of the tree are not able to receive any food since the source of transportation was cut off. This quickly causes the entire tree to shut down and begins to kill it. Normally, a tree would be able to repair itself and keep this from happening, but the larvae of the Emerald Ash Borer do not stop at feasting on only the phloem; they also attack the cambial tissue, which is the part of the tree that generates new wood and tissue. Therefore, this beetle not only eats the inner bark away and infests the tree, but it also stops the tree from repairing itself. The Emerald Ash Borer is a menace and can harass your ash trees.

Many people do not know how to tell if their trees are infected by Emerald Ash Borers. There are a few tell-tale signs.

You may have Emerald Ash Borers if:

• An ash tree is thinning at the top canopy

• Dead upper crown on the tree

•There are ‘S’ shaped tunnels underneath a small layer of bark

How can I prevent these insects?

If you wish to protect your ash trees from these harmful insects, G & G offers professional options to stop Emerald Ash Borers before they can infest a tree. For more details or information, call G & G Lawn Care and Tree Service at: